For a very long time now Ive been trying to get my little monster to eat good food..or any food for that matter. She is supper picky and doesn't like to try things. Even if its something she has eaten before, her first bite is always smaller then a tiny mouse nibble. she'll turn her head and say "no no no no" or just throw all the food off the high chair... Oohh, but if you tell her "cookie" she'll look at you with her eyes wide open and a big smile and definitely have 10 of them. She is a big fan of sweets!

I was searching through the very popular site, Pinterest, and came to find some great toddler recipes. One of them being fruit and veggie muffins that I recently tried making. They were a great success! So thanks to Natalie for posting it! =]

I pretty much followed her directions except, instead of using applesauce I made a homemade apple/pear sauce with some cinnamon. 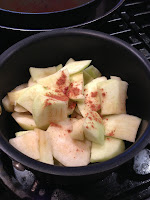 Use 1 apple and 1 pear peeled and cut into chunks. Put them in a pot with some cinnamon on medium heat until the juices start flowing. lower it a bit and let it sit in there for about 20min so it can get soft. (stirring occasionally just in case, so it wont get stuck). 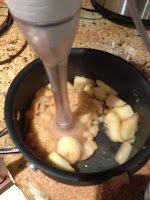 After they are nice and soft I blended it with my hand mixer. I had more then what the recipe called for so I just stuck some in a tuber ware for later.. yum!
Now the good part starts...Veggies!
You need 2 1/2 cups of any fruit/veggie puree to put in the muffins. I just used the same ones she did to try it out and Ill start experimenting for the next batch.
Veggies: broccoli, zucchini, carrot
fruits: banana, apple, homemade apple/pear sauce
Put everything together and blend away! Add a little bit of apple juice to help with the blending process. 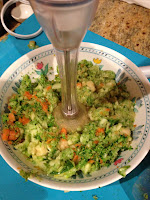 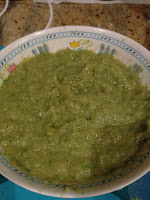 looks pretty yucky..
*tip: dont let it get too runny, because then it will need longer time to bake..
In another bowl combine your "normal" ingredients: Sugar, butter, and eggs.
Add your choice of yogurt, the fruit/veggie puree and then the rest of the dry ingredients. 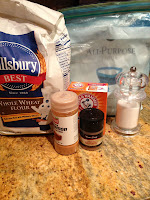 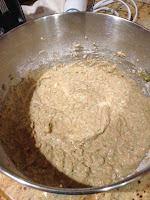 Starting to look better.. and possible taste better, but I did not try the batter. Natalie, the original poster was apparently daring enough to try it at this point. Kudos to her! 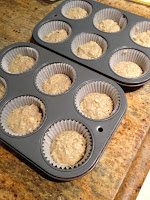 Scoop into some muffin trays and they are ready for the oven in 375 degree F. 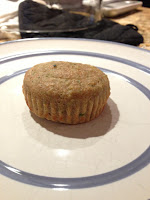 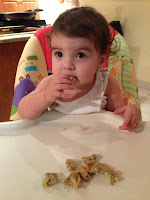 They cooked perfectly in less then 20min. I let them cool for a bit and then let Haydee try a little piece. She had a weird thinking face at first but then asked for "mas"! I was soo excited.

After making my mom try it and then her making me try it (I did one of Haydee's mouse nibbles) I can say they actually tasted pretty good! ... a bit like banana bread.
I took one to my aunts house the next day and was able to trick my 11 year old cousin into eating one thinking it was a banana bread muffin..so they work for bigger kids too!

Mommy Day and Night
Hey everyone, My name is Emily. As you can tell Im a mommy, a new one in fact. I know there is plenty of mommy blogs so I dont expect this to have a bunch of readers, even though that would be pretty cool. Im basically writting this for more of a memory savor of how mommyhood went for me.

Feel free to comment on any topic or email me. Thanks!